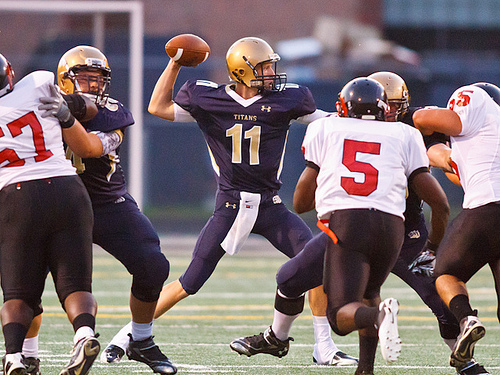 Week 5- This week’s game of the week was Whitmer vs. St. John’s.

Whitmer struck hard and fast against St. John’s in the TRAC showdown between the two schools who both entered the contest undefeated. Senior running back Jody Webb ran 85 yards to score first just 23 seconds into the game. It was the beginning of an offensive explosion for Whitmer, who would go on to score three more first-half touchdowns and go on to win convincingly 35-7 over their conference rival.

Just 3:09 after Webb’s scoring run, LeRoy Alexander did the same thing from 19 yards out to make it 14-0 Whitmer. But that was not the end of the offense for Whitmer.

Tyler Smith, in his first varsity start, rushed for a touchdown early in the second quarter and threw a TD pass to Webb to make it 28-0 at the half before their home stadium crowd of over 7,000 spectators. The offensive push resulted in 299 total yards in the first half for Whitmer, while St John’s posted -8 yards in the half.

And it wasn’t just Whitmer’s offense that was hitting hard, so was their defense. The Panthers had three QB sacks in the first half for losses totaling 17 yards. Two of those sacks came from Chris Wormby who is University of Michigan-bound.

St John’s only offense of the game came late in the third quarter when QB Brogan Roback marched the team 77 yards and scored on pass to Joe Robie. The Titans were able to move the ball more effectively in the second half, finishing with 164 yards of offense.  The Panthers amassed 438 yards.  For the season, the Panthers continue to excel on both sides of the ball.  They have outscored their opponents 215-13.

Whitmer remains tied for first place with Findlay in the TRAC at 2-0 (5-0 overall.) St. John’s dropped their first game of the season, falling to 1-1 (4-1.) –Bryan Warrick