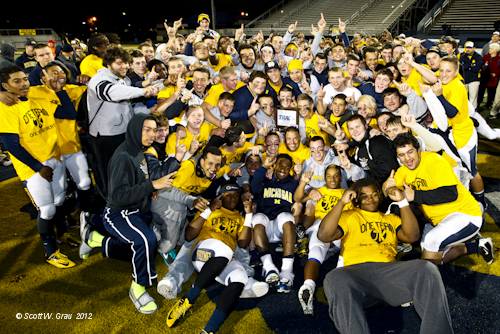 After all of the hype, the hyperbole and the prognostications of a nail-biter the greatly anticipated “game of the year” showdown between unbeaten and state-ranked Whitmer and Central Catholic fizzled into a lop-sided blow-out win for the visiting Panthers.

Whitmer’s 42-0 definitive shutout victory over the Fighting Irish, the top-ranked team in Division II, earned the Panthers their second consecutive Three Rivers Athletic Conference title.  The Panthers, entering the game ranked as the No. 5 team in Division I, dominated on both sides of the ball. Their vaunted defense held Central Catholic to 187 total offensive yards (120 yards rushing, 67 yards passing) and forced four turnovers (three fumbles, one interception).

On offense, Whitmer senior quarterback Nick Holley led the way rushing for 133 yards on 22 carries and passing for another 126 yards resulting in 259 combined yards. His efforts accounted for two-thirds of his team’s total offensive output of 394 yards (268 rushing – 126 passing).

Central Catholic’s top running back senior Amir Edwards (4 carries – 24 yards) was knocked out of the game in the first quarter. It was reported that he sustained a concussion which forced him to the sidelines for the night. With the loss of Edwards, backup Paul Moses was called upon be the primary running back for the Fighting Irish for the rest of the game resulting in 10 rushes for 45 yards. Junior quarterback DeShone Kizer scrambled seven times for 39 yards to go along with his 54 yards through the air.

Whitmer lit up the scoreboard just three and a half minutes into the game when Holly threw a short pass to his junior wide receiver Chris Boykin who then spun-out of a tackle and raced up the sideline for a 29-yard catch-and-run score. The duo combined again for a 3-yard score at the 9:11 mark in the second quarter.

In addition to his two touchdown passes, Holley rushed for two scores in the second half. Tre Sterritt’s (10 carries, 40 yards) 3-yard plunge into the end zone in the first quarter and Me’Gail Frish’s (11 carries, 96 yards) 15-yard scamper in the fourth quarter rounded out the Panther’s scoring efforts.

Whitmer took a commanding 21-0 lead into the locker room at halftime and then replicated the scoring effort in the second half to produce their 42 unanswered points.

Whitmer head coach Jerry Bell, in his freshman year at the helm, will guide his 10-0 team into the state playoffs on Saturday, November 3 hosting the first-round game. Last year, the Panthers fell 17-6 in the Division I semi-finals to the eventual state champions Cleveland St. Ignatius.

Central Catholic (9-1, 6-1 TRAC) will host an opening round game in the Division II playoffs on Friday, November 2.

Toledo Blade’s sports writer Steve Junga reported on the game and his story can be read by clicking on the following link. 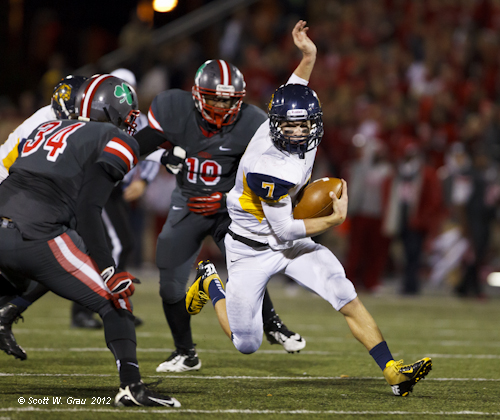