The Whitmer Panthers’ season-long goal of bringing home the school’s first state football championship trophy was derailed 20-12 by the unranked Archbishop Moeller Fighting Crusaders in the Division I title game on December 1, at Fawcett Stadium in Canton, Ohio.

“We’re extremely disappointed that we fell short of our goal, with how hard these guys worked,” Whiter head coach Jerry Bell told Toledo Blade sports writer Steve Junga after the game.  “But these guys have put us on the map, right where we want to be as a program. It’s just so hard right now.”

Bell added, ﻿﻿“This journey we were on this year was remarkable. This senior class has fulfilled their legacy as the best senior class ever to come out of Whitmer High School.

The Moeller defense did what no other team this season could do and that was being able to contain Whitmer senior quarterback Nick Holley and the Panther’s usually potent ground game.  Averaging 276 rushing yards per contest heading into the championship game Whitmer finished with 108 net yards with 92 of them attributed to Holley.  Senior running backs Tre Sterritt and Me’Gail Frisch were limited to a combined 16 rushing yards on 10 carries.

Forced to throw, Holley completed 12 of 20 passes for 196 yards and two touchdowns but he also gave up one interception in the second quarter that led to the Crusaders’ second score of the period to go along with a first quarter field goal .  At the intermission Moeller held onto a 17-6 lead.

Third-ranked Whitmer drew first blood when Holley found senior tight end Michael Dzikowski wide-open for a 37-yard catch-and-run touchdown with 8:52 to go in the opening quarter.  But the Panthers could not get any closer to the end zone than the Moeller 35-yard line for the remainder of the half.

In the closing minutes of the third quarter Nick Holley, the quarterback, hit twin brother Nate Holley, the receiver, for a 20-yard touchdown pass pull the Panthers within five points at 17-12.

For the throngs of Whitmer fans, it appeared as though the Panthers were poised for some late game heroics heading into the final quarter that would preserve their perfect season and fulfill their goal of a state title.  Unfortunately the Archbishop Moeller (12-3) defense stood firm and thwarted any chance for a comeback.

A Crusader’s 22-yard field goal with 1:54 remaining in the game sealed the victory and gave Moeller its eighth state title in school history and its first since 1985.

Whitmer closed out the season with a school best 14-1 season record.

In time the hurt from the one game lost will fade away and then the players — especially the seniors — will begin to appreciate the legacy that they created over the past three years for their beloved Panther nation football progam and the teams to follow in the footsteps:  two regional championships and a state runner-up finish to go along with a combined 39-4 record. 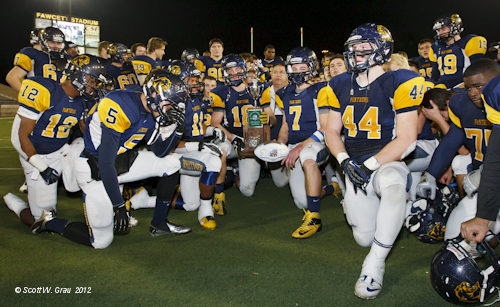 Whitmer players for a team photo with the state DI runner-up trophy. 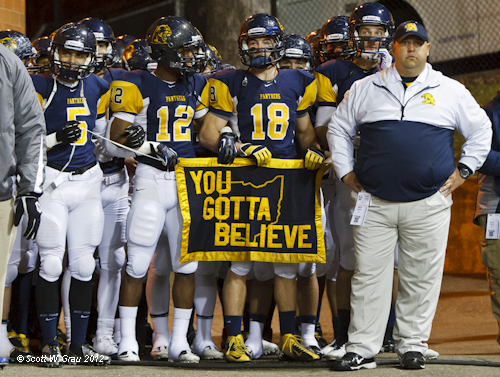 Whitmer seniors Nate Holley (18) and Tre Sterritt (12) and head coach Jerry Bell stand with the rest of the team outside their locker room waiting to take the field. 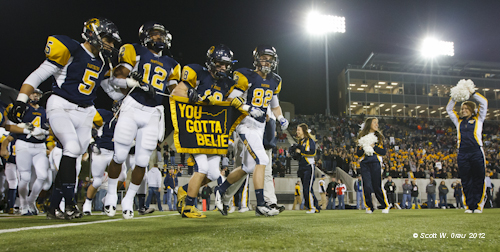 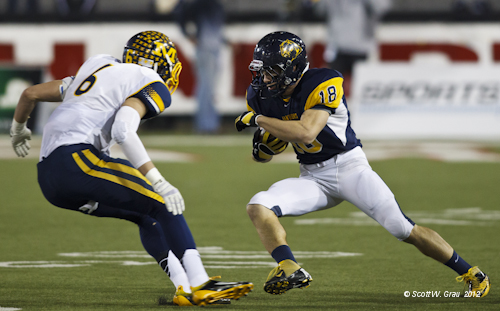 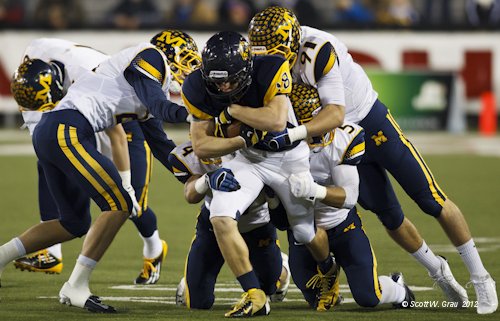 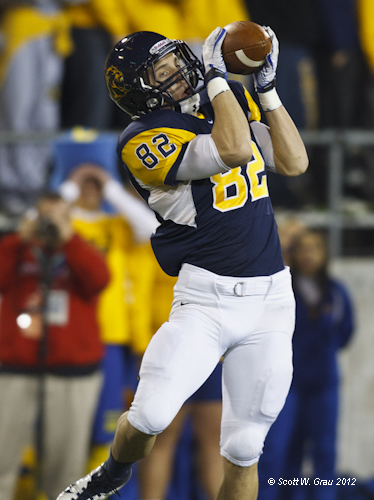 Whitmer senior tight end Michael Dzikowski (82) hauls in a pass that resulted in a 37-yard catch-and-run touchdown to put the Panthers in the lead in the first quarter. 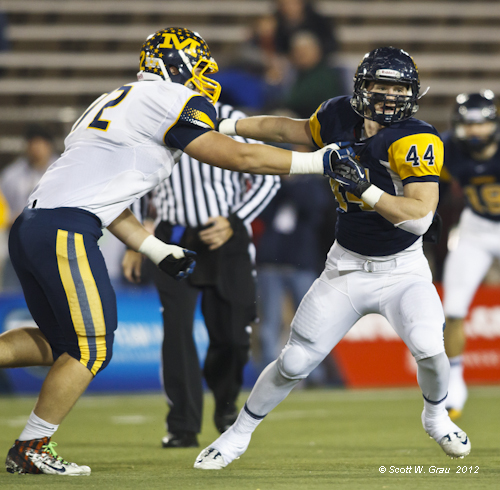 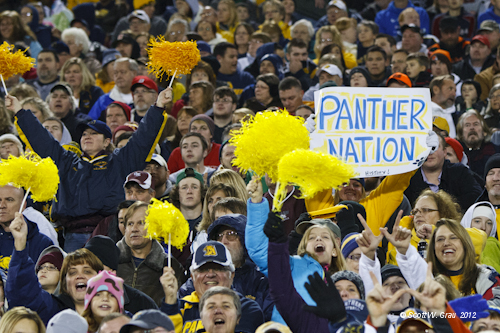 Whitmer fans show their support during the game. 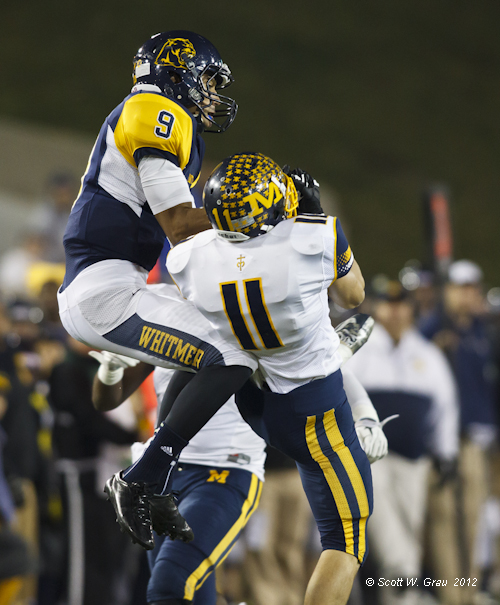 Whitmer junior wide receiver Christopher Boykin (9) battles with Archbishop Moeller defensive back Logan Kellehar (11) for control of the ball in the second quarter. 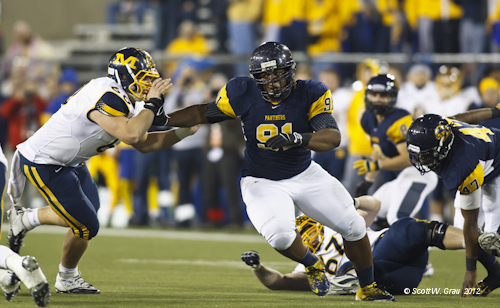 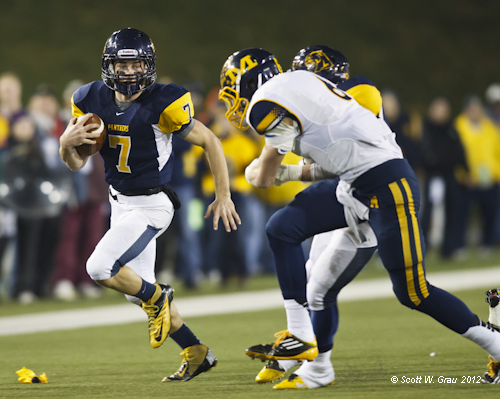 Whitmer senior quarterback Nick Holley (7) scrambles with the ball during the second quarter. 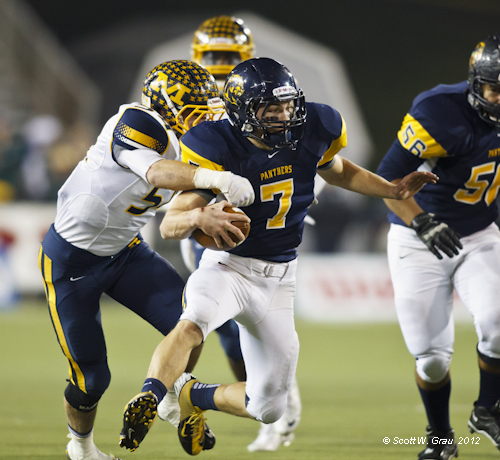 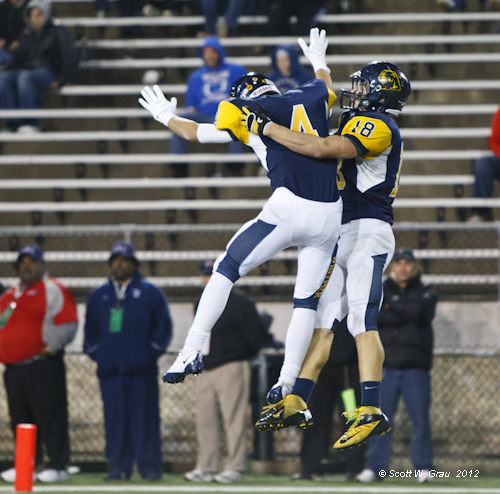 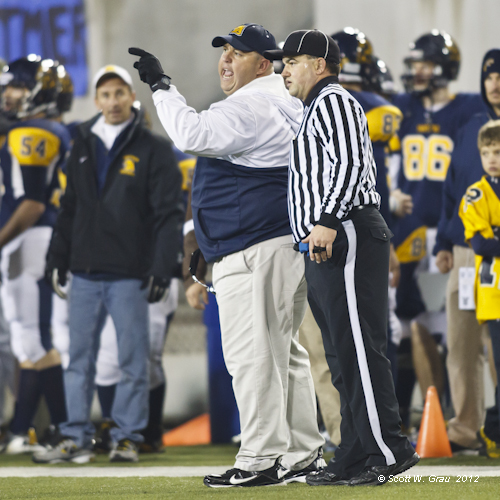 Whitmer first year head coach Jerry Bell discusses a call with an official during the game. 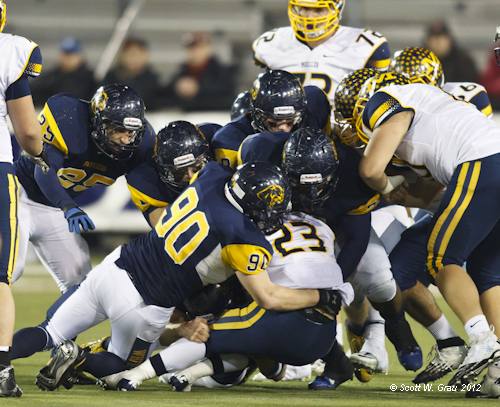 Whitmer junior Jacob LaPoint (90) leads the Panther's defense in a gang-tackle of Archbishop Moeller running back Joe Eramo (23) during the fourth quarter. 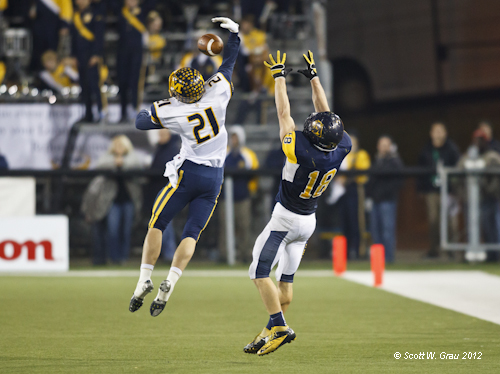 Archbishop Moeller defensive back Chris Kessling (21) breaks up a pass to Nate Holley (18) on the Panther's final play of the game. 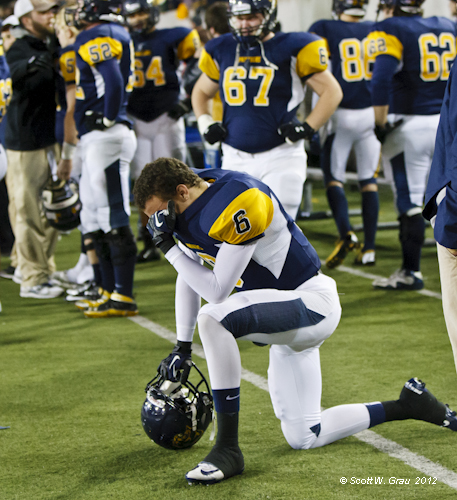 Whitmer sophomore running back Preston Simmons (6) reacts on the sideline to the Panther's first loss of the season. 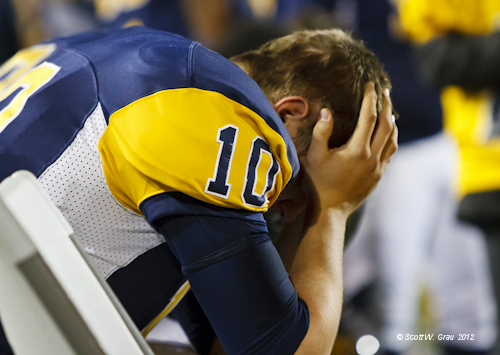 Whitmer senior wide receiver Rex Rutherford (10) hides his face in his hands at the conclusion of the game. 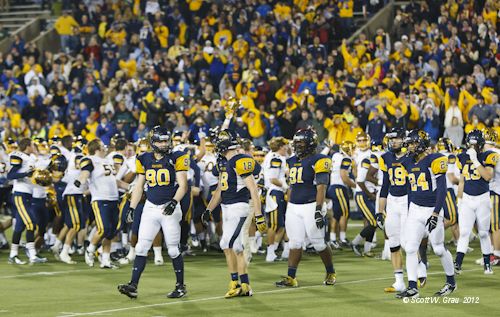 Dejected Whitmer players walk off of the field at the conclusion of the game as the Archbishop Moeller players celebrate their win. 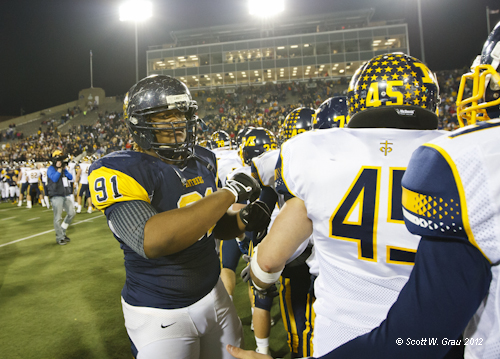 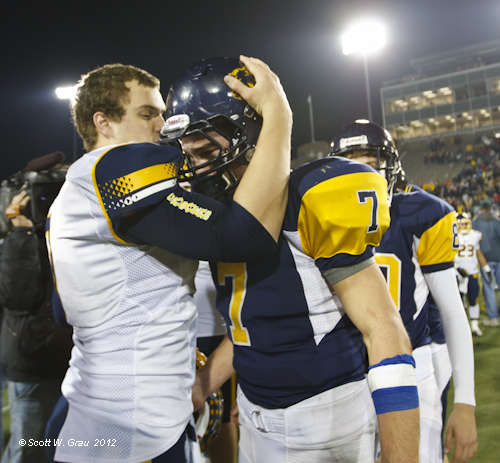 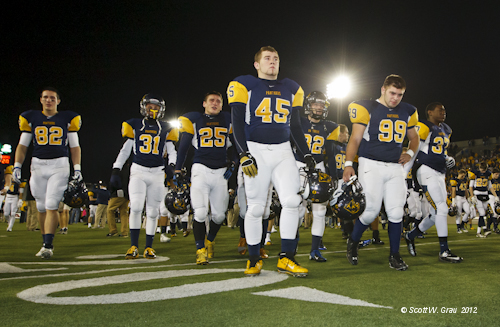 With their heads hung low, Whitmer players head for their locker room after the awards ceremony. 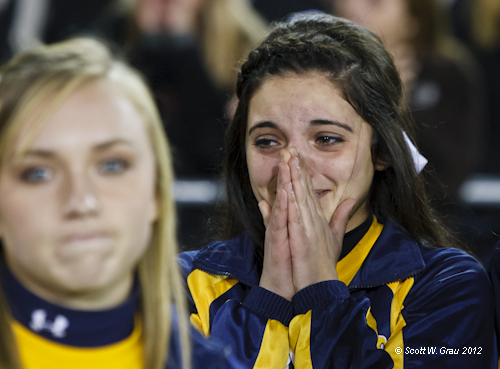 A Whitmer cheeleader reflects the emotion of the Panther nation faithful.