The unbeaten and third-ranked Whitmer Panthers overcame a 14-12 halftime deficit to knock off the Hudson Explorers 39-28 in a Division I regional semifinal football game played on November 10, 2012 at Stroble Field in Sandusky, Ohio.

Hudson’s hard-hitting play in the first half forced Whitmer into making uncharacteristic mistakes including two turnovers (a fumble and an interception), a blocked extra point, and another botched two-point conversion.

Following the intermission, Whitmer regrouped and took their first lead of the game at the 8:32 mark of the third quarter when running back Me’Gail Frisch scored from two yards out to make it 19-14.

Then on their next possession Frisch scored again on a one-yard plunge with 1:11 expired in the fourth quarter to increase the Panther’s lead to 26-14 and providing the Panthers with some much-needed breathing room.

Hudson (9-3), however, was not ready to concede the victory.  The Explorers traded scores with Whitmer in the final period to pull within five points (33-28) but saw their opportunity to knock off the Panthers slip away in the final minutes when a measurement on a crucial fourth down play showed that the nose of the football was inches shy of a first down.

With the turnover in possession and needing to get the ball back, Hudson allowed Whitmer’s senior quarterback Nick Holley to scamper 19 yards into the end zone to increase the Panther lead to the final margin.

The Whitmer defense shut down the Explorer’s on their final possession to seal the win and advance the Panthers to their third straight regional championship game. 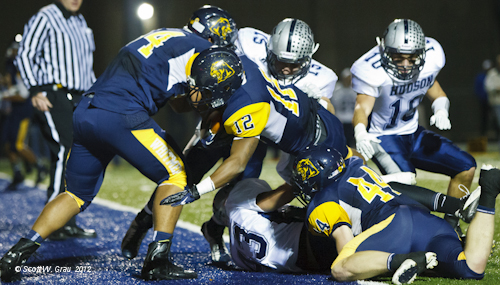 Senior running back Tre Sterritt (12) plunges through the line into the end zone to score Whitmer's first touchdown of the game. 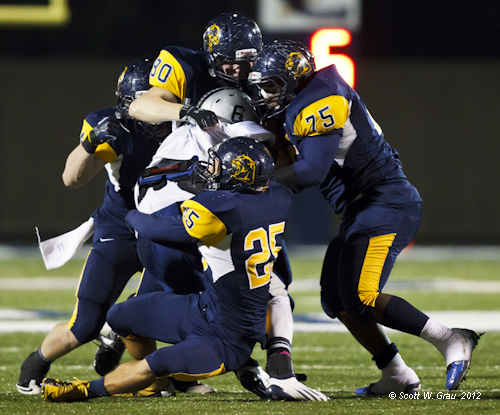 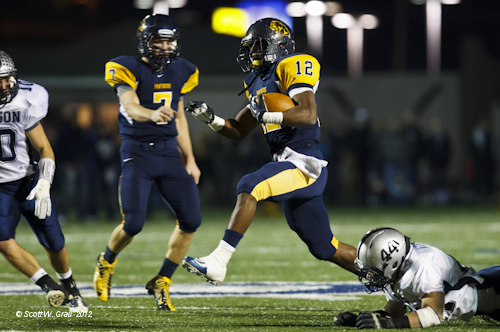 Senior running back Tre Sterritt (12) carries the ball. Sterritt rushed 25 times for 196 yards and two touchdowns in the playoff game. 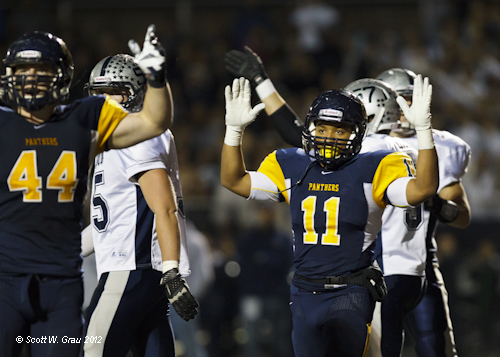 Senior running back Me'Gail Frisch (11) and junior Jack Linch (44) signal a touchdown for the Whitmer Panthers. Frisch's two touchdowns in the second half helped the Panthers overcome a 14-12 halftime deficit.