UPDATE: Whitmer in State DI Final Four for Third Year in a Row

It is said that three times is a charm.

Their beloved third-ranked Panthers (13-0) earned their third consecutive trip to the Division I state semifinals by dispatching the Massillon Washington Tigers 49-16 in the Region 2 championship game played Saturday, November 17, at Arlin Stadium in Mansfield, Ohio.

Massillon’s high-octane offensive took only two plays to get on the scoreboard following a 54-yard catch-and-run scoring strike.  But from that point on the Tiger’s offense sputtered throughout the game.

The Panther’s stingy defense held throughout the remainder of the game allowing only a field goal in the second quarter and a meaningless second touchdown with 7:42 remaining and the game well out of reach.

“High-octane”, however, would be an appropriate adjective to describe Whitmer’s offense — especially in the first half.

To kick-start their scoring barrage, the Panthers recovered a muffed punt by the Tigers in the end zone for their first score.  Then Whitmer’s dynamic senior running backs,  Tre Sterritt and Me’Gail Frisch, carried the ball across the goal line four more times to build a 35-10 halftime lead.  Frisch scored once from 6-yards out in the first quarter and Sterritt accounted for three touchdowns on runs of 12, one, and five yards.

After a scoreless third quarter, senior quarterback Nick Holley connected with his twin brother, Nate, on a five-yard touchdown pass to increase Whitmer’s lead to 42-1o.  Frisch capped off the victory with a six-yard score with 4:24 remaining for the final margin.

The Panthers will return to Arlin Stadium on Saturday, November 23 at 7:00 p.m. to play No.7 Mentor (12-1) in a DI semifinal matchup.  It took Mentor three overtimes to knock off defending state champion Cleveland St. Ignatius 57-56 to advance capture the Region 1 title. 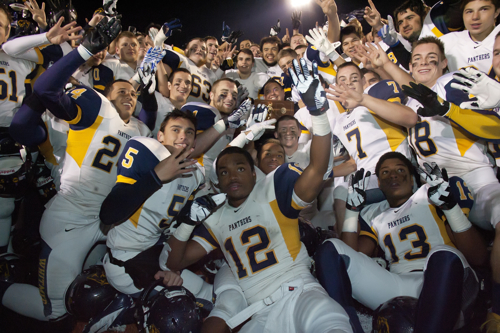