From the onset, the Fighting Irish appeared to be clicking on all cylinders.  Central’s offense scored seemingly at will while the defense shut down Madison’s productive ground game.  Coming into the game averaging 317-yards-per-game, the Rams were limited to 120 total yards in offense on 40 rushes and a 0-for3 passing attack.

Junior quarterback DeShone Kizer lead the Irish offense once again scoring the first two touchdowns of the game on keepers of 1-yard and 5-yards respectively.  His second touchdown was the result of a fumbled snap that he picked off of the turf and raced around the right side to the corner of the  end zone.  Kizer then connected with tight end Keith Towbridge who leaped over two defenders in the back of the end zone to haul in a 23-yard touchdown pass.  On the Fighting Irish’s next possession, Kizer hit wide receiver Derick Weiland in stride across the middle of the field for a 47-yard scoring strike.   When the second quarter ended the scoreboard showed that Central Catholic owned a commanding 28-7 lead.

Kizer’s stat line for the game included seven rushes for 35 yards and two scores to go along with a 5-for-6 passing performance for 115 yards and another two touchdowns.

Senior running back Amir Edwards returned to the starting lineup after missing last week’s game due to a concussion that he received midway through the first quarter of the finals regular season game against Whitmer.  Edwards picked up 83 yards on 14 carries including a 12-yard touchdown run in the third quarter.

In the third quarter junior Paul Moses scored on a 5-yard run and senior Jake Suder connected on a rare 23-yard field goal to round out the scoring.

With the win, the Fighting Irish advance to the regional finals on Friday, November 16, at Clyde High School, in Clyde, Ohio.  Their opponent will be the Avon Eagles representing the West Shore Conference.  This is the same team that knocked out Irish out of the playoffs last year with a 49-28 win in the regional semifinals. 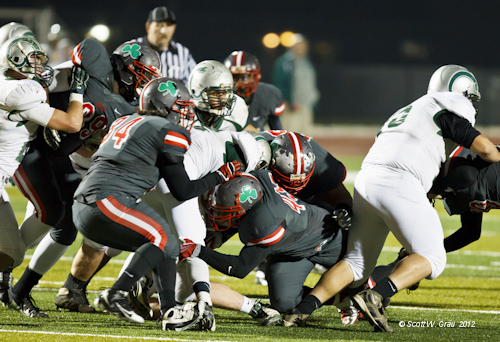 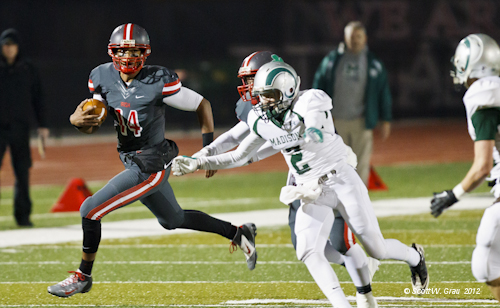 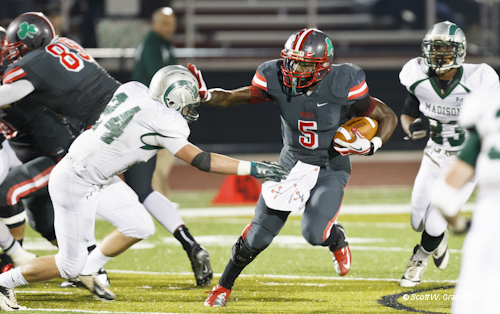 Junior running back Paul Moses stiff-arms an defender as he carries the ball. Moses scored a touchdown in the third quarter of the game.