The St. John’s Jesuit boys varsity tennis team captured the first-ever Three Rivers Athletic Conference (TRAC) league title and tournament championship on Saturday, May 5, 2012 by edging out Findlay in both regular season and championship play. The Titans scored a combined 38 points in the inaugural conference tournament that was played at Findlay High School.

The Titans netters, who are the defending Division I state team champions, are currently ranked 5th in the Ohio Tennis Coaches Association coach’s poll.

With the exception of the No. 1 singles event, St. John’s took home first place finishes in the No. 2 and No. 3 singles and No. 1 and No. 2 doubles matches. Findlay players settled for second place in each event. 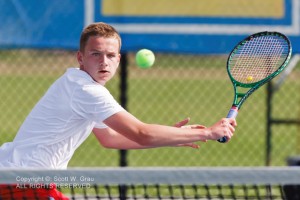 In the No. 2 singles title match it was a battle of rookies. St. John freshman Kevin Brown knocked off Findlay freshman Reid Teatsorth in straight sets of 6-0 and 6-3.

Senior Titan Spencer Crawford captured the No. 3 singles match with a 6-4, 6-3 decision over sophomore Max MacDonald of Findlay.

The St. John’s doubles teams swept both matches in straight sets as well. In the No. 1 doubles match partners Ryan Brown and Madev Mehta, a sophomore and senior respectively, prevailed over Findlay senior Josey Iliff and junior Will Jones 6-2 and 6-3.

Now that the TRAC conference season is over, all teams will move on to compete in the state playoffs beginning with sectional play which is scheduled for May 7-12. Winners will advance to the district tournament the following week (May 14-19). The OHSAA state championships are slated for Friday, May 26, and Saturday, May 27, at the Ohio State University Outdoor Varsity Tennis Courts in Columbus.