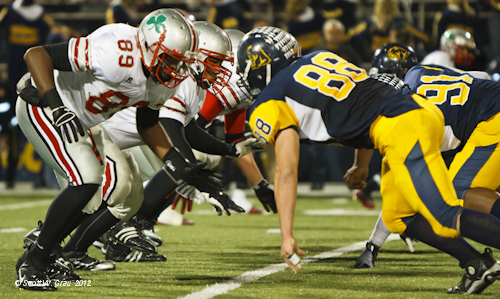 The highly anticipated matchup between unbeaten and state-ranked Whitmer and Central Catholic is only days away.  The game is scheduled for Friday, October 26 at 7:00 p.m.  At stake in the final contest of the regular season is the Three Rivers Athletic Conference title.  The visiting Panthers will bring their unblemished 9-0 (6-0 TRAC) record and No. 5 ranking in Division I into Gallagher Stadium, the home of the Fighting Irish, wh0 themselves also sport a 9-0 (6-0 TRAC) mark and are the top team in the state in Division II, a position that Central Catholic has maintained since the first poll of the season.

In the week leading up to the epic showdown, Toledo Blade veteran sports writer Steve Junga has penned a couple of feature stories that provide insight into just how big the Whitmer-Central Catholic matchup will be and some history on past big games in the schools’ histories.

You can read Steve’s stories by clicking ont one the following story headlines: