Strall Stands Out as SUA Student, Athlete and Person

The St. Ursula Academy varsity basketball team’s season ended in the sectional tournament with a 61-53 setback to Start. The loss ended the Arrows’ dreams of playing under the bright lights at Value City Arena for the state championship, but not even the end of the season can dim one of the brightest lights at SUA, senior Maddie Strall.

The value the Strall brings to her athletic teams is readily apparent by her stash of awards, but those close to her know would insist that her best traits don’t show up in the stat columns. 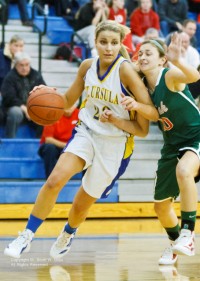 “Maddie is a leader by example and does whatever it takes to win at anything,” said head coach Ronald “Duffy” Burns. “She works on her game in the off-season and is committed to always improving. She has a great work ethic and she is a great friend to the people around her. Her wit and smile are contagious and make you want to be around her even more.”

In volleyball, Maddie was part of a team that won the state championship in 2011, as well as a runner-up finish in 2012. In basketball, she became the second leading scorer in school history with 1,066 career points. She is also only the second basketball player in SUA history to pass 1,000 points for her career.

“As you get to know Maddie, you find out that she is so much more than an athlete,” added Burns. “She is a great student and a member of the National Honor Society. Maddie has shown what it means to be a great student, athlete and an even better person. She has been a great role model and an important part of St. Ursula Academy.”