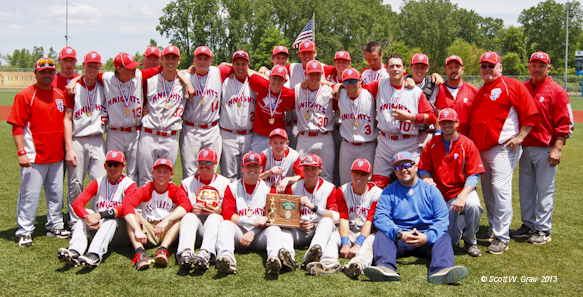 St. Francis de Sales players charge the pitcher's mound after the final out to celebrate winning their first OHSAA Division I championship since 2009.

The Knights (27-1), who won their 25th straight game of the season, captured their first district title since 2009.  Clay, the defending district champion bowed out of the state playoffs with a 14-13 record.

Senior Max Lyon pitched a one-hit complete game while striking out seven Eagles batters for the fourth-rank Knights upping his record to 6-0 for the season.

When interviewed after the game Lyon told Toledo Blade sports writer Mark Monroe that he was in control of his pitches during the game.

“I was really staying on top of all my pitches today.  I had all three working,” he said.  “My curve kept them off-balance, which allowed me to throw the other two [fastball and changeup].  I just went out and threw like I could. We’ve been talking about a district final effort all year, and it worked out today.”

St. Francis plated two runs in the second inning and two more in the fifth to continue their impressive winning streak.

The Knights will play fifth-ranked Perrysburg (26-3) in a regional semifinal tilt on May 30 at Stellar Field on the campus of Bowling Green State University.