Third-ranked Whitmer continued their winning ways as the Panthers blanked the visiting Avon Lake Shoremen 28-0 in a Division I Region 2 quarterfinal game on Saturday, November 3 at Memorial Stadium.

The Shoremen’s strategy to stop Whitmer’s running game backfired as senior quarterback Nick Holley went the to the air completing 19 of 28 passes for 263 yards and a 25-yard scoring strike to a diving Keith Howell in the endzone late in the third quarter.  Holley also weaved and bobbed his way for 75 yards on 18 carries including a 40-yard broken play dash down the sideline in the final period to put the game out of reach.

Whitmer running back Me’Gail Frisch score on a two-yard plunge in the second quarter.  Place kicker Michael Baldwin connected on a pair of field goals of 31 and 26 yards respectively.

Whitmer advances to the DI regional semifinal game for the third consecutive year against the Hudson Explorers (8-2) on Saturday, November 10 at 7:00 p.m. at Sandusky High School in Sandusky, Ohio. 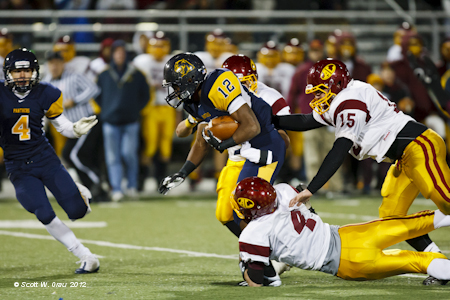 Whitmer running back Tre Sterritt drags a couple of Avon Lake defenders with him as he fights for additonal yards. Sterritt gained 35 yards on seven carries in the game. 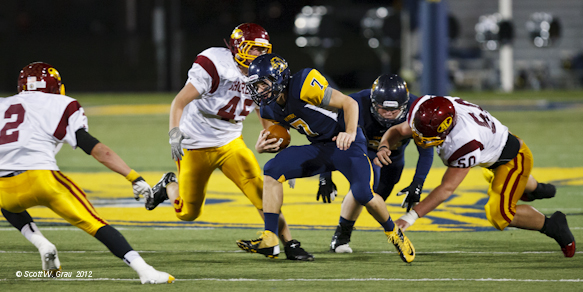 Whitmer senior quarterback Nick Holley dances past Shoremen defenders. Holley rushed 18 times for 75 yards including a 40-yard scoring dash in the fourth quarter to go along with 263 yards in a 19-of-28 passing performance. 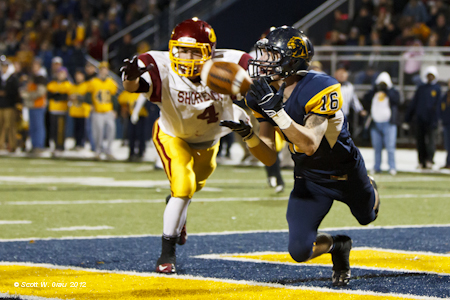