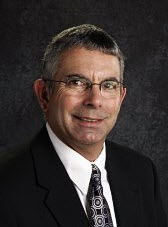 In August 2013, Mike Richards was selected by the Three Rivers Athletic Conference Executive Board to become the new conference commissioner succeeding the Ken Myers who served as the TRAC commissioner for the league’s initial two years of existence.

Richards, who resides in Bluffton, Ohio, has been the superintendent of the Allen East school district in Lafayette, Ohio since 1998. He served as the principal at Lima Perry High School from 1987-1998.

Prior to moving to Lima Perry, Richards served as an English teacher, athletic director, and head varsity football coach at Bluffton High School from 1982-87.

A 1969 graduate of Doylestown Chippewa High School in Ohio, Richards graduated from Bluffton College in 1973 and earned his master’s degree from the University of Dayton in 1975.

Richards has served as the past president and vice president of the Ohio High School Athletic Association’s state athletic board and he served 15 years on the Northwest District Athletic Board.

Richards has coached football, basketball, baseball, and track and field at a numerous schools throughout his 40 years in education and athletic administration, including Bluffton, Columbus Grove, Allen East and DeGraff Riverside. He also has 30 years of experience as a registered track and field official.