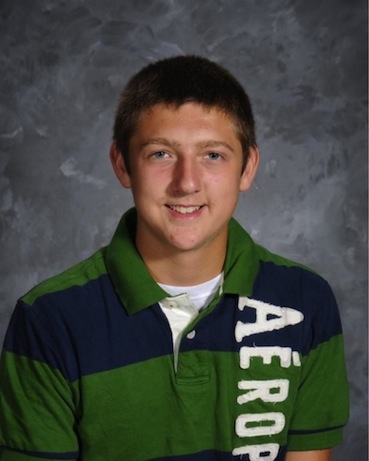 In today’s world of high school sports, it’s not uncommon to see the school football team borrow a soccer player or two to fill the role of the kicker. For Whitmer, one of these athletes is sophomore Michael Baldwin.

Baldwin is currently playing football and soccer, and plans to play on Whitmer’s basketball team this winter. This season is Baldwin’s first for kicking extra points and kickoffs for the football team. Baldwin has been playing soccer for as long as he could remember. With most of his athletic focus being on soccer, Baldwin wasn’t tuned in to football until his friends suggested kicking earlier this year.

“(My friends and I) had a football tee set up in the park. Since I play soccer, I figure I’d see how well I could kick,” Baldwin explained. “I ended up kicking really well and my friends said I should try out for the football team’s kicker over the summer. I thought it would be a good idea, so I gave it a try.”

Baldwin tried out for Whitmer’s football team and is now contributing by kicking extra points and kickoffs. Although his experience as a kicker is minimal, Baldwin has high goals for this football season.

“Individually, I hope I can convert on all of my point-after-touchdown attempts. As a team, I’d like to see us win a state title. That’s the one goal that every player on the team is working for.”

When Baldwin isn’t kicking for the football team, there’s a good chance he is kicking for Whitmer’s soccer team. This past winter, the soccer program was taken over by head coach Steve Zampardo. Being a part of the team before and after the head coach switch, Baldwin commented on the changes that accompanied Coach Zampardo and how he thinks the team has responded to them.

“Coach Zampardo brought along a system of play that was new to most of our team. He’s had past success with his system at Whitmer and other schools, so we know that we can be successful under Coach Zampardo.”

Despite the new program, the Panthers got off to a slow 2-4 start. The Panthers were shut out in all four of their losses and were outscored by their opponents by a combined score of 21-5. Baldwin said that in spite of the disappointing start, the Panthers are staying optimistic and “want to be peaking at the right time – into and through the playoffs.”

When asked about Baldwin, Coach Zampardo commented on his work ethic and desire to get better.

“Mr. Baldwin is a very hard working young man who is serious about his commitment to work and improve his game every day. We are glad to have him on the Varsity team as a sophomore and the soccer team is proud of his work on Whitmer’s Football team as their number one kicker. He has a great future here at Whitmer as an overall athlete and we look forward to him contributing to our team for the next three years. He is a great representative for the Whitmer athletics program.”

When asked what his plans were for his athletic career past high school, Baldwin commented,

“I definitely have big plans for the future. Being my first year of playing football, I don’t know if I would want to try to continue kicking or playing soccer, but I definitely hope to keep playing sports in college. I still have some time to decide which I would rather do, so we’ll have to wait and see what happens.”

Baldwin said that his most memorable experience in his short athletic career is winning the City League title this past winter with Whitmer’s basketball team. In 2011, Baldwin hopes to be part of the All-League soccer team and start on Whitmer’s JV basketball team.