That is the number of Port Clinton batters that went to the plate to face Central Catholic senior starting pitcher Evan McNair and advanced no further.

McNair threw the first perfect game of his career as the Fighting Irish defeated the Redskins 4-0 in a Division II sectional semifinal varsity baseball game played May 8, 2012 at Mercy Field in Toledo. 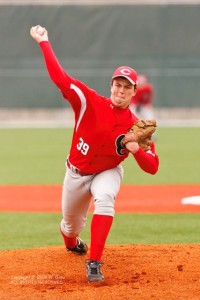 Central Catholic varsity head coach Jeff Mielcarek stated that this was the first perfect game that one his pitchers had thrown in his 26 years at the helm. He did not know if this feat has ever been accomplished before in the school’s history but acknowledged that is was the first perfect game to be pitched at the new state-of-the-art Mercy Field.

The right-hander retired 21 straight batters. McNair notched eight strikeouts throughout the game but he had to rely on his teammates to make the other 13 outs.

Mielcarek stated that although McNair will get the recognition for the victory it would not have been possible without the superb defensive efforts of the Fighting Irish infielders which recorded 12 put-outs. The only fly ball to make it past the infield perimeter was chased down in the spectacular fashion in the 4th inning by sophomore center fielder Chad Keebler.

“It was a great team win,” said Mielcarek.