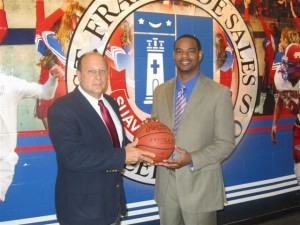 Lewis led a very busy life as a two sport athlete during his time at Eastern Michigan University (2003-2008) where he lettered four years in football as a standout wide receiver and three in basketball as a shooting guard.

He was the offensive MVP of the football team in 2006 and followed that up as a runner-up selection for Defensive Player of the Year in the MAC for men’s basketball. A team captain in basketball, Lewis graduated with a degree in comprehensive theater art and secondary education from EMU.

After playing basketball professionally in China and several seasons of Arena II football, Coach Lewis returned to Eastern Michigan as a graduate assistant in its basketball program while earning his Master’s Degree in Sport Management.

He is married to the former Jessica Minnifield, a Toledo Central Catholic and University of Michigan basketball player.  They have a son, Travis Jr.