﻿The Lady Eagles of Notre Dame dominated the Sylvania Northview Lady Kats in the OHSAA Division I district final hosted by Perrysburg High School on February 2, 2013.  Closing out the first quarter with a commanding 23-4 lead Notre Dame cruised to a 55-32 win to captured their second consecutive district title.

The Eagles, back-t0-back champions of the Three Rivers Athletic Conference, have their sights set on making the trip to Columbus once again.  Last year Notre Dame fell 54-45 to state runner-up Kettering Fairmont in the state semifinals.

The unranked Eagles (23-3) will meet eighth-ranked Perrysburg on March 5 at Central Catholic High School in the regional semifinal.

“Our coach told us we had to come out with intensity and knock them out in the first quarter” Floyd told Toledo Blade sports writer Steve Junga after the game.  “That’s what we did. I felt like we had a lot of intensity, and we kept it throughout the whole game.

To read the full Toledo Blade story on Notre Dame’s victory click on the link. 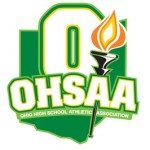