Northwest Ohio has a history of producing talented high school basketball players and teams. Several teams from the area have graced the state rankings and made Final Four appearances over the years. A number of student-athletes have gone on to play basketball collegiately and professionally. Great players and teams are by-products of a solid program, which are built by quality coaches with tremendous passion, vision and attention to detail.

Three of the longest-tenured basketball coaches in the Three Rivers Athletic Conference – Ed Heintschel of St. John’s Jesuit, Bruce Smith of Whitmer and Mark Gedeon of Fremont Ross – fit the description of a quality coach, and look to be contributors to TRAC success moving forward.

Heintschel, in his 32nd year at the helm of St. John’s, has become synonymous with winning throughout his career. He is currently ranked No.21 on the Ohio High School Athletic Association’s list of All-Time Winningest Coaches with an overall record of 536-172 (.757). Having led the Titans to 12 Toledo City League titles and six trips to the Division I Final Four appearances, Heintschel has had SJJ positioned as a state powerhouse for a long time.

“We’ve had much more success during my tenure at St. John’s than I had ever envisioned,” Heintschel said. “The program has built to a point where the expectations are very high, but I view that as a tribute to the program. This has been a labor of love, and I have met some terrific people along the way.

“Every player is memorable,” Heintschel continued. “I truly feel that each and every one has contributed to our success, some statistically more than others, but each gives a little of himself to make it happen.”

Another TRAC school that has enjoyed an abundance of talented and memorable players over the years is Whitmer. Coach Smith is in his 21st year as the man in charge of the Panthers program, following a four-year stint at Delta and nine years commanding the huddle for Napoleon. 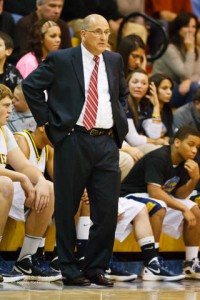 Holding a career record of 321-180, including a 269-143 mark at Whitmer, Smith’s program has really bloomed over the last several years. His list of recent accomplishments include winning the 2008 regional championship, winning the 2011 Toledo City League championship and being named the 2011 AP All-Northwest District Co-Coach of the Year in Division I.

Smith maintains contact with many of his former players including Justin Keller (currently on the Whitmer coaching staff), Ryne Smith (a senior on the Purdue basketball team) and Kevin Koger (a senior on the Michigan football team). He is also proud of former 2011 Whitmer basketball alumni Ben Syroka and Franklin Lindsey, who are playing college basketball at Wittenberg and Owen’s Community College, respectively, as well as Kenny Hayes, who plays football at Ohio State.

From the successful athletes Smith has coached in the past to the talented players on his current roster, he looks forward to Whitmer’s future in the TRAC.

“The competition in the TRAC will be incredibly tough, with the combination of all the good athletes and great coaching. We look forward to the challenges that lie before us.”

One of the challenges that may have been part of the non-conference schedule in past years, but will now be a recurring threat is the basketball team from Fremont Ross. Coach Gedeon, who first got involved in coaching at age 18, is in his 17th year as the head coach of the Little Giants.

Under his watch, Fremont Ross has amassed four league titles, six sectional titles and a district championship in 1997, when his team reached a program-high ranking of No. 11 in the state. Gedeon is the all-time wins leader in the history of the boy’s basketball program, with a career record of 189-162, and has twice been named the AP Northwest Ohio Coach of the Year.

Gedeon and his family have remained as firmly committed to the school, as the school has been to him throughout his career. His wife teaches at the middle school and their four children have all been involved with the school system and are close to the program. Gedeon’s sophomore son is on the Little Giants basketball squad, his eighth-grade son is the team’s video coordinator and his third son, a fourth-grader, is the team’s ball boy.

The relationships that Gedeon has formed are a big part of who he is and the program he has built, and have been the backbone not only of the school, but of the community as well. He has had several former players return to coach on his staff, including four current coaches.

“I feel very fortunate to be involved with one school for my professional career,” said Gedeon. “I’ve also been able to coach many special people and players. Without the bond and dedication I’ve had with my players and coaching staff, none of our program’s success would have happened.”

Looking ahead to the future of Fremont Ross in the TRAC, he sees a conference that should make a name for itself in the state.

“The TRAC should be one of the top leagues in all of Ohio,” Gedeon proclaimed. “I don’t know of a league that can boast four schools that won at least 20 basketball games last year as the TRAC can. It should be a great league for competition.”

Time will tell what kind of reputation the TRAC will earn amongst all the other conferences in Ohio, but it’s safe to say that its three longest-tenured coaches will continue to put forth quality programs.