Co-Athletic Director Carl Janke introduced Chris Hedden to his new players, the school’s administration, and the local media. He replaces Coach Mike Blochowski who resigned at the end of the season last year. 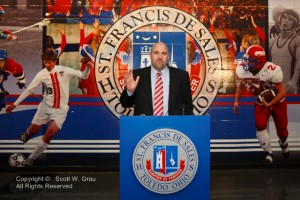 Hedden is a 1990 graduate of Tiffin Columbian High School where he earned all-state honors as an offensive guard during his senior year. He went on to play two years of football for Ashland University and graduated from Heidelberg University in 1994 with a Bachelor of Arts in secondary education, health, and physical education.

“It’s an honor and it’s a privilege to be named the head football coach at St. Francis,” Hedden said. “I’m excited. I’m going to be enthusiastic. And I am really happy to be part of the [St. Francis] family.”

During his speech, Coach Hedden spoke of the rich tradition of St. Francis football. He stated that his high school football coaches would tell him and his teammates that they were playing the ‘best of the best’ when they played the Knights each year in preseason scrimmages. Hedden recalled how excited he was to be going up against one of the premier football programs in the state.

“There is tradition here. There is a high standard of excellence that we have got to uphold,” Hedden said as he spoke of the school’s 16 conference championships, 11 state playoff appearances, and two state football championships in 1984 and 2001.

“The past has done their part and now it’s the present and we have to do ours.”

Co-Athletic Director Dick Cromwell, who guided the St. Francis football program for 26 years before retiring in 2009, said ‘Coach Hedden brings a wealth of offensive football knowledge that we know will be put to good use with our Knights. He is a well organized individual with great passion for football and educating young men. We are excited about the future of the Football Knights.’

When asked why he returned to coaching at the high school level after so many years in the college ranks, Hedden said, “High school is where it all starts. It’s the fundamentals of football.”

In addition to his coaching duties, Coach Hedden will join the faculty at St. Francis as a full-time teacher at the start of the new school year in August. Until then he will continue to work in the insurance business. Hedden is married to Jennifer Hedden, who has a chiropractic practice in the Toledo area. The couple has a two-year-old daughter.