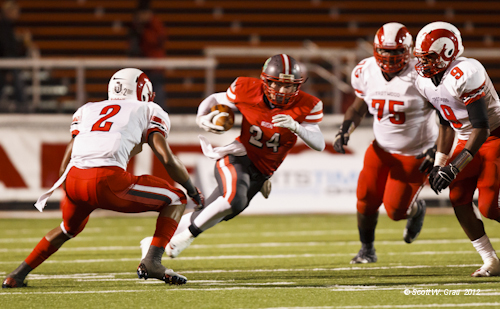 ﻿Central Catholic junior football player Derich Weiland was profiled in the November 21, 2o12 issue of the The Press Newspaper, a weekly newspaper that covers the eastern suburbs of Toledo including Oregon, Northwood, and Genoa as well as the rural communities of Lucas and Ottawa counties.

Derich Weiland, whose family home sits on the dividing line between Woodmore and Genoa high schools, took a group tour of Central Catholic in December 2009. He said he was blown away by what Central Catholic had to offer.

“My dad (Bill) works with one of the Central alumni and was telling my dad about the good characteristics of the school,” Weiland said. “I went to tour Central in the eighth grade, and after that day I kind of fell in love with the school. It was an amazing experience and I fell in love with the school. The teachers were phenomenal and I enjoyed the passion the school had. The students were very welcoming and they all seemed like they got along.”

Click on the link to read the complete article: