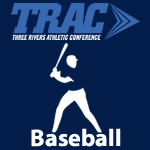 The St. John’s Jesuit Titans captured their third Three Rivers Athletic Conference varsity baseball conference title with a 4-3 win over Central Catholic in the championship game played on May 27, 2015 at Mercy Field in Toledo, Ohio.

The final standings, which are based on the performances of each team in the conference tournament, are as follows:
1. St. John’s Jesuit
2. Central Catholic
3. St. Francis de Sales
4. Findlay
5. Clay
6. Whitmer
7. Fremont Ross
8. Lima Senior